Consult Yoga Expert
Chat With Us

PCOS or Polycystic Ovary Syndrome is a common hormonal disorder that many women go through during their childbearing years. Though it is a non-fatal condition, it may affect the patient’s ability to conceive and carry a child.

There are several other side-effects of PCOS which may affect your daily life. Unfortunately, there is no specific line of treatment that can erase this disease permanently out of your life, it can only be managed.

Apart from medication and therapies, doctors also suggest yoga for PCOS.  It can play a crucial role in restoring the lost hormonal balance. Yogasanas are counted as the most effective remedies when it comes to the natural management of PCOS. 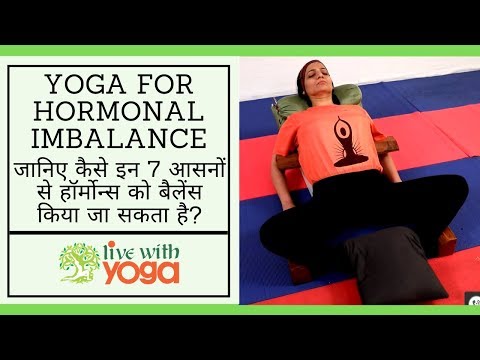 This asana is very useful in dealing with the biggest side-effects of PCOS - weight gain and obesity.

It is done to increase the level of oxygen in the overall body and reduce anxiety and stress.

It improves the breathing ability and increases the oxygen intake in the body. The asana also helps in lowering blood pressure and calming down nerves to relieve pressure and anxiety from the body.

This asana is used to activate the adrenal gland and improve the production of cortisol hormone.

It is an anxiety and stress busting exercise that relaxes your body and helps in calming your nerves.

Sirsasana needs to be performed under professional guidance. So make sure you do it under the supervision of an expert. As the name suggests, it involves putting your head down and your legs up in the air without any support. The asana basically works against gravity which activates the pituitary gland and restores lost hormonal balance.

This asana is used to relieve stress and improve blood circulation across all organs especially in the legs.

As the name suggests, this asana involves every single body part. Thus, it stimulates oxygen flow through all parts of the body and balances the hormonal system throughout the body. Regular practise of this asana directs the glands to produce the required hormones in the right amount and not more or less than it.

It is performed to calm down emotional anxiety. The hormonal disturbance caused by stress and work pressures can easily be treated with ujjayi pranayama as it improves the oxygen circulation throughout the body and helps in getting rid of depression.

Know Everything About PCOS

The exact cause of PCOS is yet to be found. But it is common knowledge that high levels of male hormones keep the ovaries from producing hormones and creating eggs. There are a few other reasons found to be responsible for PCOS:

There are some common signs and symptoms defined by doctors for PCOS:

Unhealthy eating habits and the stress to balance work and life are two of the primary causes of hormonal disorders like PCOS among women. It is good to exercise but exercising without any discretion may lead to several problems. Many females undergo tough exercise regimes even during their periods. It is one of the potential causes of problems related to the reproductive system.

One should only stick to light exercises during periods. Yoga includes a set of exercises that relax the organs and improve hormonal activity during periods. It is highly suggested to avoid inverted asanas during periods as they reverse the blood flow. Inversions mean going against nature which may lead to problems in coming years.

When done correctly, specific yoga asanas for PCOS can help in restoring the lost balance of hormonal cycles. They activate the pituitary gland that restores the normal menstrual cycle. All you need to ensure is that the asanas are followed with diligence and patience without any gap.

The above yoga asanas are highly recommended as yoga for PCOS to get pregnant. If you are having issues with conception or pregnancy, you must practice these asanas under professional guidance. They will surely help in getting your body back to normal and relieve the PCOS symptoms to a tolerable level.

Yes, yoga can help in the successful management and cure of PCOS. But the patient needs to follow it ardently without any irregularity and with due diligence.

If a woman is facing issues with pregnancy due to PCOS, she can find effective relief with some specific yoga asanas. Regular practising of yoga asanas, a healthy diet, and some medication can really help to relieve the symptoms of PCOS and increase the chances of conception.